There are numerous studies and research that demonstrate the therapeutic effects that animals produce on humans.
Science over the years has shown that companion animals and among them, dogs, are able to help a convalescent patient with the mere fact of being present.

There is no doubt about the importance that Assisted Animal Therapies are charging (from now on T.A.A.) in Spain, when complementing the therapeutic processes that develop in certain pathologies.
Some animals such as dogs, horses and dolphins are widely known as therapy animals, while other species, such as sea lions and farm animals, begin to be introduced in intervention projects in Animal Assisted Therapies in Spain. 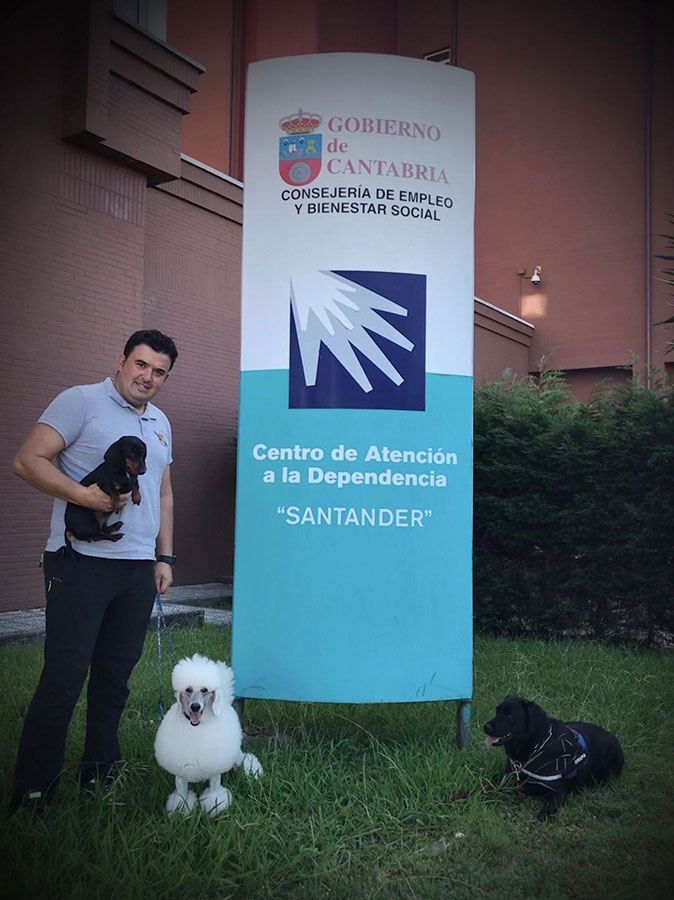 SPECIFIC OBJECTIVES OF THE PROGRAM

Are those specific points on which we can act through therapy. It is important to know them to define objectives, so we can facilitate the design of the therapy and its evaluation.

Empathy is the mental and affective identification of a subject with the mood of another. Lack of empathy is common in certain groups and can easily lead a subject to violence. The improvement in the ability to empathize is, perhaps, the most relevant of the therapeutic possibilities of dogs. Due to the inter-affective communication with the man they are suitable to emit emotional messages and are able to vary their behavior according to the messages they receive from them, this is perceived as "real" attention and interest of the dog by them, without prejudices or pious attitudes ( contrary to what they perceive in therapists, center staff or even volunteers). This "honest" attitude of the dog is highly valued and allows them to open up to this communication which can be progressively transferred from dogs to other people.
Empathy
In people with affected cognitive abilities there is normally no affection in their emotional system, by communicating with the dog through emotions (affection, anger, fear) the person recovers the possibility of interacting, being understood and understanding the other, avoiding certain types of introspection.
Inter-emotional Communication
The use of dogs in groups with cognitive retardation is delicate, however it is possible through the care or training (always positive) of the dog to help these people to become interested in an occupational therapy. The relationship with dogs acts as a hitch.
Cognitive Training
Assuming dog care tasks, either individually or collectively, can help increase attention span.
Emotional Training
Increase of social outings, interactions with other people. The dog has a fourfold beneficial effect for this: it increases the number of exits, deflects the focus of problematic aspects of the subject, provides the feeling of not facing the situation alone and is a "social lubricant" that facilitates interaction with others persons.
Social integration
Improvement of movement capacity, either by stimulating atrophic areas, or by increasing the amount or variety of exercise performed by the subject.
Motor skills
As the dog can not assess the problem of the individual emits messages of tranquility in times of crisis and the interaction with him is a parenthesis in situations perceived as serious allowing us, by empathy, to relax.
Normalizing Effect
Decreased feeling of loneliness of the individual, the dog is an interlocutor who responds emotionally in moments of loneliness.
Company
The need to follow standardized protocols in the care of the dog makes recover habits and obligations similar to those of an active working life, this has a strong benefit in inactive people (for example retirees).
Self esteem
Decreased feeling of loneliness of the individual, the dog is an interlocutor who responds emotionally in moments of loneliness.
Introspection

The use of dogs in groups with cognitive retardation is delicate, however it is possible through the care or training (always positive) of the dog to help these people to become interested in an occupational therapy. The relationship with dogs acts as a hitch.

Animal-assisted therapy helps improve the quality of life for patients both physically and emotionally.